Delta Kappa Epsilon (ΔΚΕ; also pronounced D-K-E or “Deke”) is one of the oldest North American fraternities with 54 active chapters in the United States and Canada. Delta Kappa Epsilon was founded at Yale College in 1844 by 15 men of the sophomore class disaffected by the existing houses on campus. They established a fellowship “where the candidate most favored was he who combined in the most equal proportions the gentleman, the scholar, and the jolly good fellow. The private gentleman’s club the DKE Club of New York was founded in 1885 and is currently in residence at the Yale Club of New York City. For more information, visit the Deke website. 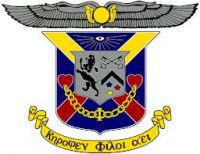