Founded in 1872, Alpha Phi is the 4th oldest national women’s sorority, and was the first women’s society to use Greek letters as an emblem.
Famous Alpha Phis include actress Kimberley Willams-Paisley (Beta-Northwestern), actress Jeri Ryan (Beta-Northwestern), President of Lifetime Networks Andrea Wong (Zeta Phi-MIT), first female treasurer of the United States Georgia Neese Gray (Upsilon-Washburn).
Crest: The Alpha Phi coat-of-arms was adopted in 1922. The shield is Bordeaux with a scroll and ivy leaf above it. Inscribed on the scroll is our public motto, “Union Hand in Hand.” A bar of silver crosses the shield from left to right; the upper half of the shield contains a Roman lamp in silver and the lower half, Ursa Major. The meaning of the symbols depicted on the crest is a significant part of the ritual witnessed at initiation. 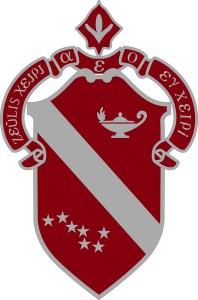